Pope Francis has arrived in Uganda to a jubilant welcome as Hundreds of Ugandans flocked Entebbe International airport to receive him. Pope Francis’ Shepherd One(Alitalia aeroplane) touched down at Entebbe International Airport from neighboring Kenya’s Jomo Kenyatta International Airport at 5:07pm. Ugandans welcomed the pope with dance and songs as president Museveni together with his wife Janet Museveni led government officials, including the Prime Minister Dr Ruhakana Rugunda speaker of Parliament Rebecca Kadaga, diplomats and religious leaders in receiving him. 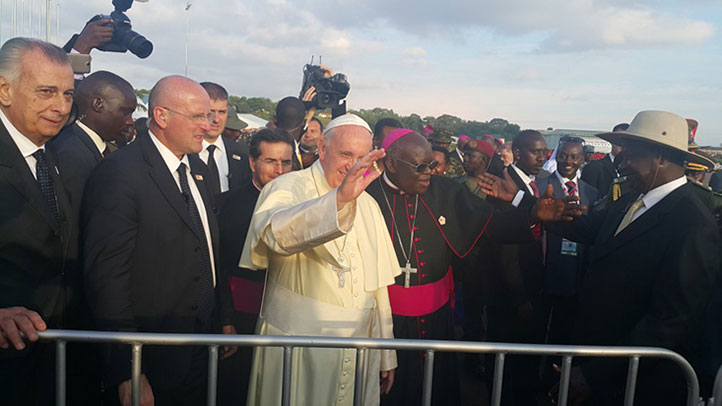 The Vatican Anthem was then played as the pope received a 21-gun salute followed by the Uganda National Anthem and the EastAfrican community Anthem.

The Pope’s entourage then headed to Statehouse Conference room where he  adressed diplomats, and senior government officials.

In a brief address to dignitaries and the media at State House, Pope Francis thanked Ugandans for the “gracious welcome” and that he was very happy to be in Uganda to commemorate the 50th anniversary of the canonisation of Ugandan martyrs.

The Pope praised Uganda for standing out in East Africa as a welcoming destination for refugees giving them hope and a new beginning in life. He said Africa offers ” promise, hope, challenges, achievements” and that the world looks at “Africa as a continent of hope.”

Pope Francis said Uganda is indeed blessed with abundant resources that the citizens are challenged to conserve and preserve. Tomorrow at 3pm the Pope is scheduled to meet youths at Kololo Independence grounds and he said he was looking forward to meeting them as they form the bulk of the Ugandan and African population and are the future of their country.

He also said he hoped his visit will help encourage people to grow in faith & spiritual values that have been slowly eroded by the adoption of globilsation over traditional cultural values.

The Holy Father will conclude his first ever visit to the African continent, in Central African Republic where he is heading on Sunday.

The Ugandan trip has an extra significant as the Church will be marking 50 years of the canonization of the Uganda Martyrs.