Mbarara City NRM Registrar Accused of Sidelining With Some Aspirants

Mbarara City NRM Registrar Accused of Sidelining With Some Aspirants

Following the just concluded NRM municipal council elections in Kakiika municipal council that were conducted in 86 villages between Benon Mugume and Kyabwisho Gumisiriza, Gumisiriza and his supporters have today flogged the NRM offices in Mbarara accusing the Mbarara city NRM registrar Ssebuma kawesi of side lining with his opponent to conduct new elections without him in the know. 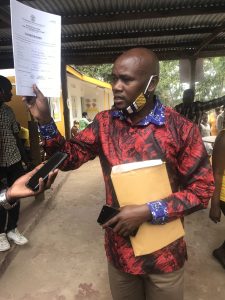 While handing over his declaration forms from the electoral commission for the final stamp to continue with his campaigns ahead of the nomination, the Mbarara city registrar informed him that there is a petition saying that some cells are going to vote again.

Speaking to the press, he said he is aware that the NRM office is working with the opponent to disorganize him not to hold the NRM Flag.

However, Gumisiriza says he will not be intimidated hence asking for justice.