It was at Old Trafford, at an England friendly prior to the World Cup in 2006, when Owen Hargreaves jogged on to the pitch to see two fans wearing T-shirts emblazoned with the  slogan: ‘German football is rubbish’.

Partly this was an old footballing rivalry at play and partly a dig at Sven Goran Eriksson’s selection of Hargreaves, then at Bayern Munich.

Before long, such ignorance was starting to fade. Hargreaves was England’s best player in another miserable World Cup quarter-final defeat and Germany went a step further with considerably more panache. 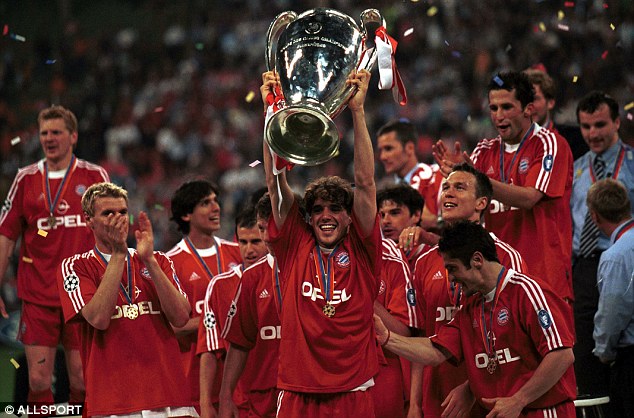 Winners: Owen Hargreaves lifts the Champions League trophy after victory over Valencia in 2001 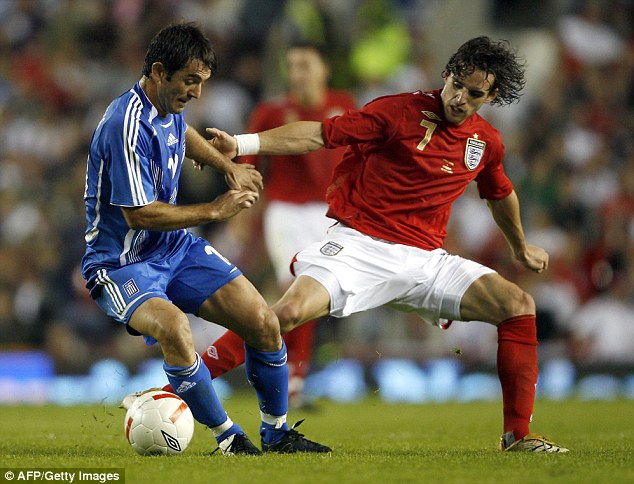 Winning them over: Owen Hargreaves (right) had to justify his selection in the England squad

Four years on, there was a 4-1 thrashing in Bloemfontein and, on Saturday, Wembley pays  homage to the rise of the  Bundesliga when it hosts the first all-German Champions League final, between Bayern and Borussia Dortmund.

‘The infrastructure has always been there,’ said Hargreaves.

‘In 2006, the England lads were asking, “Why are you playing there?” I’d say it’s because I can guarantee the club I play for is better than yours.

‘Then we spent six weeks there at the World Cup. They are  saying, “Wow, it’s stunning”. The  structure has always been there and now they are fortunate to have a generation of players and coaches coming together.’ 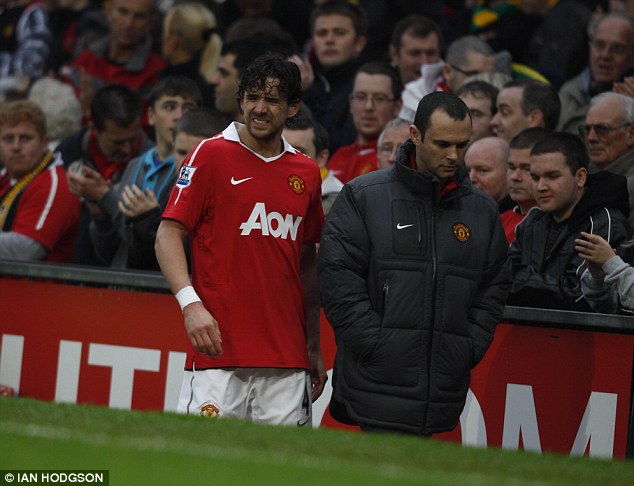 Blighted: Hargreaves’ time at Manchester United was spoiled by injury towards the end of his time 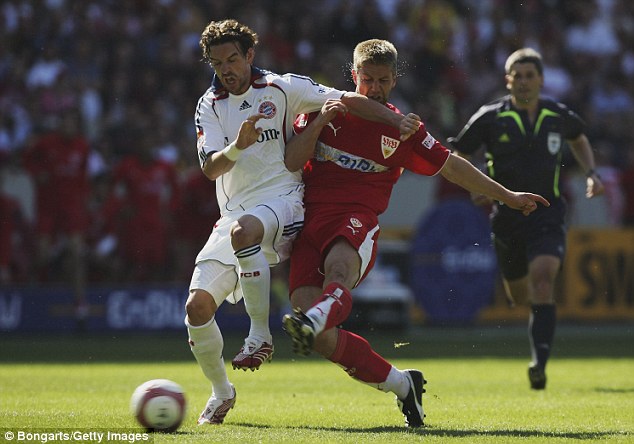 Bayern, beaten by Chelsea on penalties in last year’s final, have the look of a team which could dominate Europe for years, having romped to the domestic title and smashed Barcelona 7-0 over two legs. They have  commercial clout, will recruit in the summer and manager Jupp Heynckes will depart, to be replaced by Pep Guardiola.

‘People asked me why he chose to go there, not Chelsea,’ said Hargreaves. ‘Well, he’s a smart man. If Bayern is not the best-run club in Europe, you would struggle to find a better one.

‘But if they win the treble, what’s he going to do? It’s only downhill from there.

‘You have to say they’re No 1. That team is as good as you’ll find, with a work ethic. I’d be shocked if they didn’t  steam-roller everything over the next few years. The only issue is complacency. 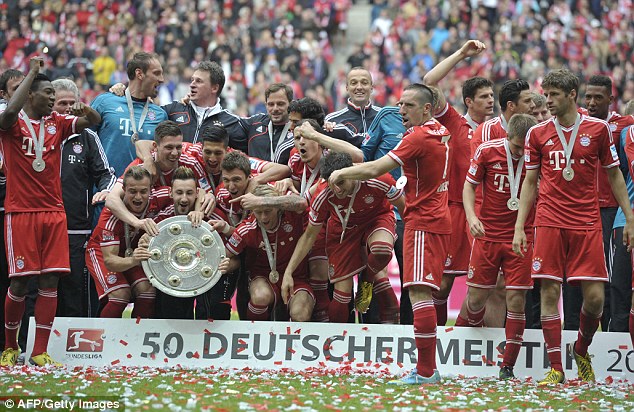 Ready to rule: Bayern Munich will hope to kick on from winning the Bundesliga 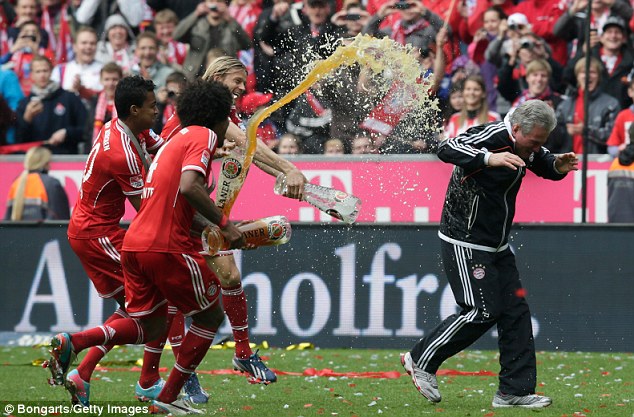 ‘I’ve heard great things about Guardiola and maybe it’s good that he keeps it fresh. Barcelona is the best example. They were the best team ever to play this game and to get beat as they did in the semi-final can only be down to complacency.

‘Any team with success over a period can fall victim to that. We thought they were undefeatable and then to go and get beat  7-0 over two legs, it wasn’t even close. It could have been 12 or 13.’

Hargreaves moved to Munich from Canada as a teenager and spent a decade at Bayern, breaking into the first team at the time of ‘intimidating’ personalities such as Oliver Kahn and Steffen Effenberg and winning the Champions League in 2001.

He moved to Manchester United, where he won the Champions League again, but his career in England was blighted by tendinitis in his knees.

He remains firmly in the  Bayern fold, however. He was in the dressing room after their  victory against Arsenal and will be at Wembley on Saturday.

‘Bayern have the right balance,’ said Hargreaves. ‘They’re a model for a lot of people. Their stadium is probably the best in Europe, their training ground is one of the best, commercially they turn a profit and make their own money. It’s done naturally.

‘It’s mostly (club president)Uli Hoeness who has made the club what it is. He’s the heart and soul. There was a time when he said they had to decide if they had enough money to cut the trees and plants down and to go from that to where they are is pretty amazing.’

Hargreaves has not played since his release from Manchester City last summer and, although he remains reluctant officially to end his playing career at the  age of 32, he admits it might be time to focus on what he calls ‘Chapter Two’. 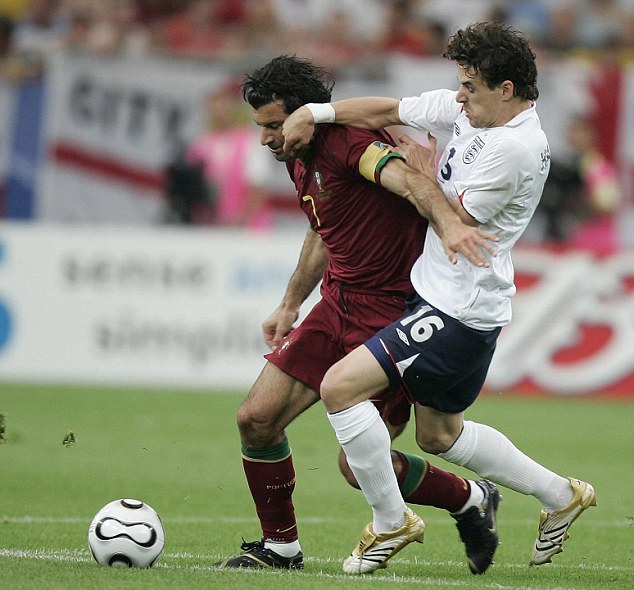 Best in show: Hargreaves performed well against Portugal in the 2006 World Cup 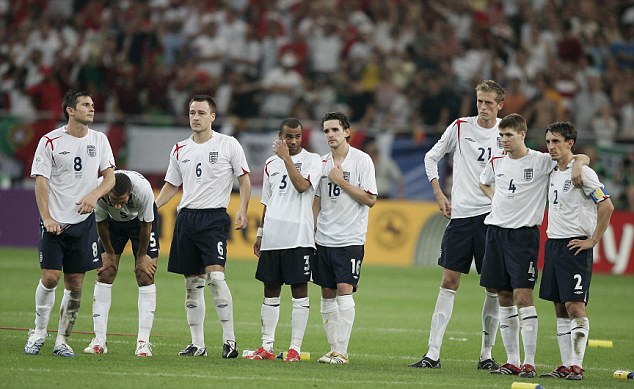 Crushed: But England were beaten on penalties by Portugal after Wayne Rooney was sent off

He will join BT Sport’s coverage of the Barclays Premier League and begin his coaching qualifications, but has no desire to rush into management.

‘Too many managers go in and coach too young,’ he said. ‘The American football way is for a lot of those guys to learn their craft over a 10-year period.

‘Clubs can take players and develop them and let them see different parts of the management side, like Patrick Vieira at City, and slowly give them more responsibility rather than just, “Here, you take the reins”.

‘There are many examples of hugely successful players taking that responsibility and being out of the game before they’ve started — Gareth Southgate, Alan Shearer, Roy Keane, Bryan Robson, some of the best players this country’s ever seen.

‘For them not to be given the opportunity to do it longer I find quite remarkable. Germany is pretty sensible.  It’s a very structured environment. I learned so much being there. I picked up good habits.’

Not rubbish after all. 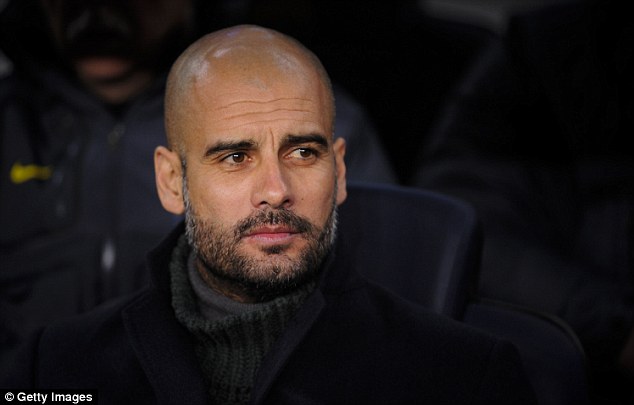 Unstoppable? Pep Guardiola will take over from Jupp Heynckes next season