Bobi Wine Finally Speaks out about his son "SIMON"

Bobi Wine Finally Speaks out about his son “SIMON”

After all the criticisms that were taunted on the self proclaimed Ghetto President alias Bobi Wine, about the son rumored he fathered with one UK based Safina, he took onto social media to clarify all the gossip that has been lingering around different blogs and scribes. Below is his reaction.

I had not wanted to mention anything about the on going gossip in the media,but then when a story is going around about me and much as it has some facts,it has a lot of lies too,it is upon me to address and clear it once and for all. 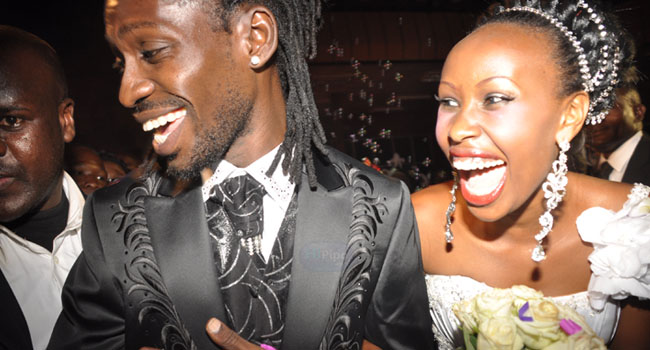 Bobi Wine and his wife Barbie at their wedding.

THIS IS MY OFFICIAL STATEMENT ABOUT IT.

First of all I did not give that information to ‪‎Ashburg‬ Kato or any other journalist and whatever has been reported here on Social media. On Sunday 18th jan, I called for a family meeting at my big brothers home to discuss a very important issue and the details of the meeting are reserved for family.

However,HALF BAKED INFORMATION leaked and by wenesday 22nd jan, it was already public news,everybody with their own version.
Secondly,you may be aware, a few years ago, a lady went to the media and claimed that I was the father of her child. Having known her before,I stood as a man and accepted responsibility of the child.

However due to constant misbehaviour of the mother that included going to the media presenting herself as my second wife, turnishing my name, hobnobbing with my worst enemies in the presence of my son constant disrespect and nagging.Questions began to come in my mind.

I had to bare with all that FOR THE SAKE OF “MY SON”.Then finally,I got information that some one else IN LONDON was the true father of the boy and I was just being BACKMAILED. There was no other way to rule this out other than doing a DNA rest. I know it’s more like a betrayal to doubt a child you know as your own but then what’s the point living in darkness…

So, YES,I TOOK THE CHILD FOR A DNA TEST, …AND YES THE DNA RESULTS PROVED BEYOND REASONABLE DOUBT THAT I AM NOT HIS BIOLOGICAL FATHER,…..AND YES I CALLED THE MOTHER AND SHE DID NOT DENY ANYTHING. SHE CAME CLEAN,TOLD ME EVERYTHING AND SHE APOLOGISED TO ME,AND THAT IS THE END OF THE STORY….at least for her because honestly the only thing I can do to free my soul is to FORGIVE HER.

As for “my son” Simon, me and him know that we have been father and son for all his life now and WE SHALL FOREVER BE FATHER AND SON. A strong bond was created between us and not even DNA can challenge my relationship with him. He loves me and I love him very much.

I WILL CONTINUE TAKE FULL RESPONSIBILITY OF HIM,BUT HIM ALONE and being the father figure that he has always known. He is MY CHILD, all his brothers,sisters,aunties, uncles,every body loves him.And nothing will change. I will only request Safina to apologise to all parties involved for TELLING A LIE and maintaining for so long that it caused so much pain,embarrassment and confusion. After that,let’s wish each other A HAPPY YEAR.